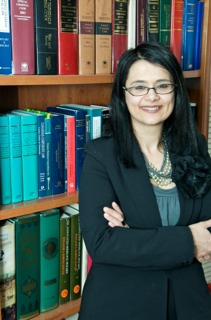 M. Sandy Di Martino studied French Language and Linguistics and Italian Studies (with a focus on Language and Linguistics and Renaissance Literature) at the University of Toronto and received her Bachelor of Arts (with High Distinction) degree in 1995. Ms. Di Martino received her LL.B in 2001 from the University of Windsor. She articled with Fraser Milner Casgrain LLP in Toronto (now Dentons Canada LLP) and was called to the Ontario Bar in 2002.

Ms. Di Martino practised Civil Litigation at Fraser Milner Casgrain LLO in Toronto from 2002 to 2006. Her practice was focused in the areas of professional negligence and construction litigation in addition to general civil litigation. She also participated in mentoring students, articling students, and first-year associates.

Ms. Di Martino then decided to pursue her passion for criminal law and she began that pursuit as an Assistant Crown Attorney (Criminal Law Division) from January 2007 to December 2008 in Brampton and Halton Regions. She conducted numerous bail hearings, assisted in plea court, and conducted trials mainly at the Ontario Court of Justice level with some experience at the Ontario Superior Court of Justice.

Ms. Di Martino then returned to private practice for approximately eight months (from January 2009 to August 2009) where she practiced civil litigation at Theall Group LLP. Her practice during that period of time was focused in the areas of product liability, trade-marks litigation, insurance coverage, regulatory matters, and construction law.

Ms. Di Martino then decided to return to her passion for criminal law and she started her own criminal defence practice in September 2009 (M. Sandy Di Martino, Barrister, and Solicitor). Approximately half of her practice is focused on prosecution work as Per Diem Crown Counsel (Criminal Law Division) primarily in the Central West Region (namely, Guelph and Peel Regions), including bail hearings (both adult and youth), trials, plea and set date court. She is also a Member of the Criminal Duty Counsel Panel in Peel, York, and Toronto Regions since 2009. Sandy maintains a limited defence practice as she is pursuing her second passion for teaching in the area of criminal law. She has taught the Criminal Law Course as a Sessional Instructor in the Summer 2017 and 2018 Terms at Osgoode Hall Law School as part of the Canadian Common Law Program, Osgoode Professional Development. She has also taught The Legal Profession in the Winter 2018 Term as a Sessional Instructor at the Faculty of Law at the University of Windsor. She will be returning to teach The Legal Profession and Criminal Law in the Winter 2019 Term at the Faculty of Law at the University of Windsor. She is also working on an advanced criminal law course (“Social Issues in Criminal Justice”) to be offered to upper-year law students at the Faculty of Law at the University of Windsor in the Fall 2019 Term. Given the vast experience over the years, she has developed an appreciation for both perspectives in a courtroom, defence and Crown.