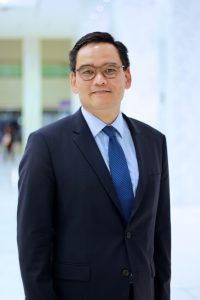 Michael Doi is a Legal Director with the Ministry of the Attorney General of Ontario at the Financial Services Commission of Ontario where he leads the delivery of legal advice and services to the Commission on a broad range of regulatory and enforcement matters.   Mike is a graduate of the Royal Military College of Canada (B.A.), University of Windsor (LL.B.), University of Detroit (J.D.), and University of London (LL.M., London School of Economics), and was called to the Ontario Bar in 1995.  Before joining the Commission, Mike served as a military lawyer with the Office of the Judge Advocate General in Ottawa and later practised with a downtown firm in Toronto before serving with the Constitutional Law Branch at the Ministry of the Attorney General of Ontario.  Mike teaches constitutional law at Osgoode Hall Law School.

He also volunteers as the President of the Federation of Asian Canadian Lawyers, and as the Vice Chair of the Momiji Health Care Society Board in the Japanese Canadian community